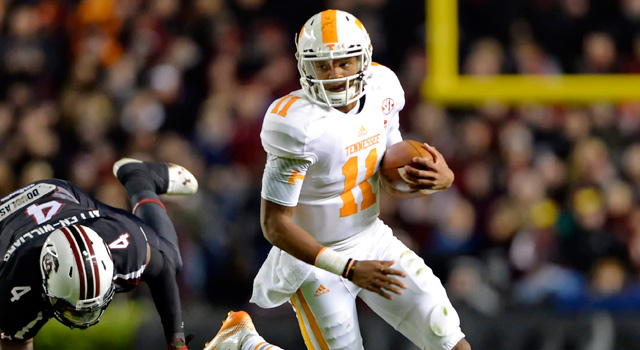 Our Countdown to Kickoff preview continues with a look at the best 25 teams in the country. These rankings are based off the best teams playing at a neutral site. That means I believe the top ranked team can beat anybody at a neutral site while the 21st ranked team would lose to the other 20 teams at a neutral site but beat everyone else. All five of today’s teams would consider these projected seasons as a success. We start our countdown at the bottom of the rankings with Boise State.

Boise State has faced their fair share of hate over the last decade. They were the beloved underdog that no one thought could be good enough to compete for a national championship. Then they went 8-5 in 2013 and lost Chris Petersen. Things weren’t looking great for the Broncos but the era of the playoff promises new hope. A 13-0 season could get them in to the top four with a little help from national chaos. This season may be the year to do it.

Offense: Eliah Drinkwitz has been added as the new offensive coordinator, a man who spent years with offensive genius Gus Malzahn. The biggest issue for the Broncos is the quarterback position. Sophomore Ryan Finley is the only player with experience (27 passes), but the Broncos current depth chart says “Finley or Thomas Stuart.” Former quarterback Grant Hedrick and all-conference running back Joe Ajayi are gone but the offense is left in the hands of a very capable receiving core featuring senior Shane Williams-Rhodes and an offensive line that returns all five starters

Defense: Last year’s defense faced questions of consistency, giving up 27 points per game, but still ranking in the nation’s top 20 in run defense and pass rush. The biggest issue was being vulnerable to the big play, giving up 10 40-plus yard runs. The Broncos return nine defensive starters with plenty of depth. Junior Kamalei Correa returns at defensive end after accounting for 19 tackles for loss and 12 sacks. Seniors Darian Thompson and Donte Deayon combined for 13 interceptions last seasons.

Schedule: The Broncos play in the Mountain West Conference so there isn’t much to analyze here but their biggest test may come out of conference. Boise State travels to BYU on September 12th and don’t face a major test until October 16th when they take on Utah State on the road.

I may be a lot higher on the Gophers than most people but Jerry Kill is a fantastic coach that has made this team better with every season. There is no reason to believe that this season will be any different, especially with Minnesota being in the wide-open Big 10 West division. The Gophers play two of the best teams in the country this year in TCU and Ohio State but the rest of the season is favorable for a run to the conference championship game. Kill may not have an elite squad but they just may be good enough.

Offense: The Gophers offense was the definition of one-dimensional last season, finishing 119th in the nation in passing yards and had the highest rushing percentage of all non-option offenses. Quarterback Mitch Leidner will be the key to success but the junior only completed 51 percent of his passes in 2014 with 11 touchdowns and 8 interceptions. Fortunately, the run game is strong and also lead by Leidner, who ran for 600 yards and 10 touchdowns. The Gophers lose running back David Cobb who had 315 carries last season but will be replaced by a committee of talented backs, including senior Rod Williams Jr. The offensive line returns three starters, including Josh Champion who has 39 career starts under his belt.

Defense: The defense returns many pieces from a defense that was much better the first five weeks of 2014. The likes of Cedric Thompson and Damien Wilson will not be easy to replace but what does return is enough for Minnesota fans to be excited: six of last year’s top eight linemen plus Scott Ekpe (who missed last year with injury), three of the top four linebackers, and five of the top seven defensive backs.

Schedule: The Gophers open the season with a Thursday night home game against TCU, which could end up shocking the nation and at least showing everyone that Minnesota is a competitor. The Gophers get their toughest division opponents at home (Nebraska, Wisconsin) while traveling to Ohio State and Iowa.

Bobby Petrino has taken over another new club and looks to be at the start of another string of success with Louisville. Petrino’s squad has become a popular destination for transfers from across the country and has a lot of pieces in place for an ACC Championship run. Louisville lost three conference games last season by a combined 19 points last season. After a promising 9-4 season under Petrino, the Cardinals are facing a lot of questions on both sides of the ball.

Offense: Louisville played three quarterbacks last season but has seemed to settle on Will Gardner for the 2015 starter if he can stay healthy. The junior completed 57 percent of his passes with just a 1.4 percent interception rate. The Cardinals also bring back their top rusher in junior Brandon Radcliff who averaged over 5 yards per carry and lost just one fumble in 150 touches. Eli Rogers and Devante Parker leave the receiving corps somewhat depleted but transfers Jamari Staples (UAB) and Ja’Quay Williams (Texas A&M) come in to help. The offensive line only returns second-year starter Tobijah Hughley at center but only have seven starts between the other four positions.

Defense: The Cardinals boast one of the best front seven in the nation that include senior defensive end Sheldon Rankins who had 13.5 tackles for loss and 8 sacks in 2014. Louisville also adds TCU transfer Devonte Fields who will fill the Cardinals’ whole at linebacker. The secondary was awesome last year but Petrino’s staff will have to find replacements for all four key positions. Hard-hitting safety Josh Harvey-Clemons transfers in from Georgia after being a 5-star recruit in 2013.

Schedule: Louisville has two SEC schools on this year’s schedule: Auburn in the Georgia Dome to start the season and Kentucky in Lexington in the season finale. Other than that, they have a schedule that could push them to the ACC Championship. Road games against Florida State and Pittsburgh may be their toughest tests, along with a home date with Clemson.

Tennessee is in prime position to make a run in the weaker SEC East division but they still may be another year away from being a true national contender. Butch Jones is in his third season in Knoxville and looks to once again improve. The Volunteers play in the mighty SEC though so a run at the national title seems far-fetched but a run to Atlanta could happen with a couple of important wins down the stretch.

Offense: Tennessee returns junior Josh Dobbs who is just as smart on the field as he is off the field. The dual-threat quarterback will be surrounded by talent at the skill positions, especially in the backfield. Sophomore Jalen Hurd, who ran for 899 yards last season, is joined by Alvin Kamara who started his career in Tuscaloosa. The receiving core is led by senior Marquez North, who missed much of 2014 with a shoulder injury, and Pig Howard, who has been used in every aspect of the Volunteer offense. The biggest question comes on the offensive line, which finished 126th in sack yardage last season. Questions on the line are also a concern for the health of Dobbs with no other experienced quarterbacks on the roster.

Defense: A.J. Johnson is gone but the Volunteers bring back plenty of talent on the defensive side of the ball. Derek Barnett and Curt Maggitt, who combined for 21 sacks last season, lead an experienced front seven. Jalen Reeves-Maybin is coming off a breakout season and will fill the linebacker position for Tennessee. The secondary is just as loaded as the rest of the team and could be the best in the SEC. Junior cornerback Cameron Sutton leads the charge after intercepting 13 passes and breaking up 13.

Schedule: The schedule is where Butch Jones could run into problems. According to ESPN’s Football Power Index, Tennessee is a favorite in every game other than a trip to Alabama. That includes hosting Oklahoma, Arkansas and Georgia along with road trips to Gainesville, Lexington and Columbia, Missouri.

Oklahoma State has some big pieces in place this season and look to bounce back from a 7-6 season. Five of the Cowboys’ losses came against ranked opponents and the schedule doesn’t get easier this year. Oklahoma State faces their toughest test at homes meaning Stillwater could be a stop for the national champion to go through.

Offense: Daxx Garman is gone from the quarterback position but the Cowboys may not need to fret as they hope to get rid of the inconsistency problem. Senior J.W. Walsh looks to win the starting job but promising sophomore Mason Rudolph, who won his first career start in Norman, will make the quarterback battle last until September. Last year’s run game was miserable for the Cowboys, averaging less than four yards per carry. Luckily, the offense revolves around the passing game which returns the eight leading receivers from 2014. The offensive line returns six different players with starts and adds UAB transfer Victor Salako, who has 23 career starts under his belt.

Defense: The Cowboys defense lives and dies by the big plays, going all out to force mistakes. This year, Mike Gundy’s squad may have the right playmakers to make it happen. Oklahoma State now returns five of its top eight linemen, six of seven linebackers and five of six defensive backs. Junior defensive end Emmanuel Ogbeh is the star of the defense, finishing 2014 with 11 sacks.

Schedule: This may be one of the weirdest schedules in the nation. The Cowboys face Kansas State, Baylor, TCU and Oklahoma all at home this season while facing Texas, West Virginia and Texas Tech on the road. They get to play the underdog role in most of their home games and the fans in Stillwater will love it. 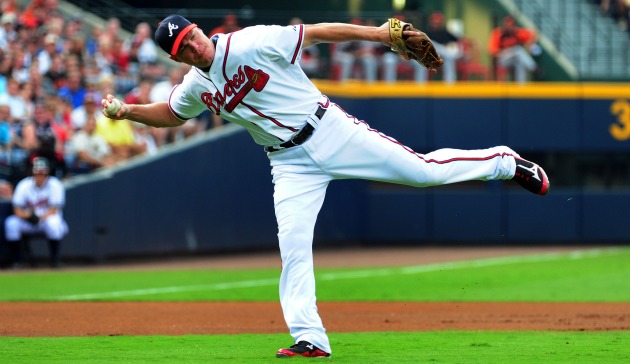 Chipper Jones to Return with Braves in 2012 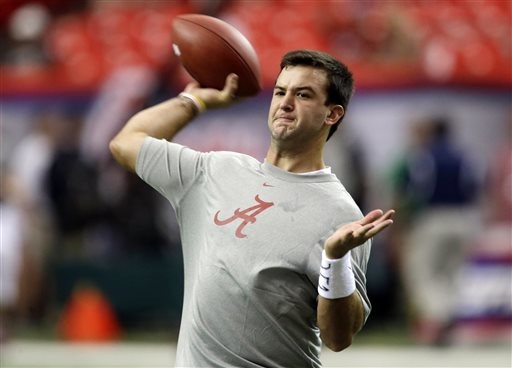